Discover Dalmatian coast and inland through a unique multi-day adventure week. Have your adventure holiday or active vacation in Croatia.

During one-week time, a unique combination of mountains, river, and sea will make it possible for you to experience the thrill of rafting and canyoning on Cetina River. Furthermore, you will paddle and snorkel in the clear Adriatic Sea and walk the old and forgotten hiking trails. These adventures are equally exciting for all generations and they do not require any previous experience. A combination of adrenaline adventures and relaxation in a private house in village Zadvarje will provide you with a week of a unique active holiday in Croatia for a very small budget.

Group size: Min 2 – Max 14 people
Age limit: Min 8 years of age if accompanied by an adult
Tour staff and support: Adventure Dalmatia Instructors & Local support.
Meal plan: 6 breakfasts, 3 dinners, 2 lunches in the local restaurant, 1 picnic lunch and 1 barbecue lunch. NOTE: For the days that do not include certain meal, local taverns are offering an option of a lunch or a dinner for a price of approx. 10,00 € per dish (beverages included).
Accommodation: 7 nights in private accommodation.
Included transfers: Airport Split – Zadvarje: 1h 15 min Zadvarje – Makarska: 30 min Zadvarje – Omiš: 30min Zadvarje – Rafting: 15 min Zadvarje – Sea kayaking: 25 min Zadvarje – Canyoning: 5 min Z advarje – Airport Split: 1h 15 min
Equipment: All the equipment is included in price and is used in the following tours:
1. Canyoning: Long neoprene pants and jackets, helmets, life-jackets Warning: For this tour, you need to bring trainer shoes or boots with shoelaces (or you can rent professional canyoning shoes in the village).
2. Rafting: dinghy for rafting, paddles, long neoprene pants and jackets, helmets, life jackets
3. Sea kayaking: kayaks (double sit on top), paddles, life jackets, waterproof containers for personal things, snorkeling gear
4. Bikes: Cube Aim 26, 27.5, and 29 bicycles, Cube Race 240 (for children)
Bad weather policy In case of bad weather, we keep the right to change the order of trips and activities (note: all the activities will be held, only the order might be changed).

All the equipment is included in price and is used in canyoning, rafting, sea kayaking and bikes

Zadvarje is located 40 km NE from the capital of the county Split and it has only 200 inhabitants. It has its own part of a coastline as municipality, while Cetina River carved its large canyon next to the village itself. In charming little village you will find everything you need for basic living: small family market if you need groceries, authentic Dalmatian taverns if you want a meal and small café. Every Tuesday you can visit local cattle fair where all kinds of animals are sold, along with handmade artifacts, clothes, tools, food etc. Unique combination of river, mountains and vicinity of the sea (only 7 km) makes Zadvarje perfect for all kinds of adventure sports and vacations.
Food and drink supply:
Grocery market, local taverns and bars are only 100 meters away from the hous
Other services:
Post ofﬁce and gas station in village Zadvarje, ATM, bank post ofﬁce, ambulance and church in the town of Šestanovac (3 km away).
Electric supply: 220 V, 50 Hz; two round pin plugs.

Transfer from the airport to village Zadvarje (200 inhabitants). Private accommodation in the center of the village – 3 different houses for a maximum of 20 people. Both houses are fully equipped; bedrooms with toilets (shared or private), air conditioning, WiFi and satellite TV. 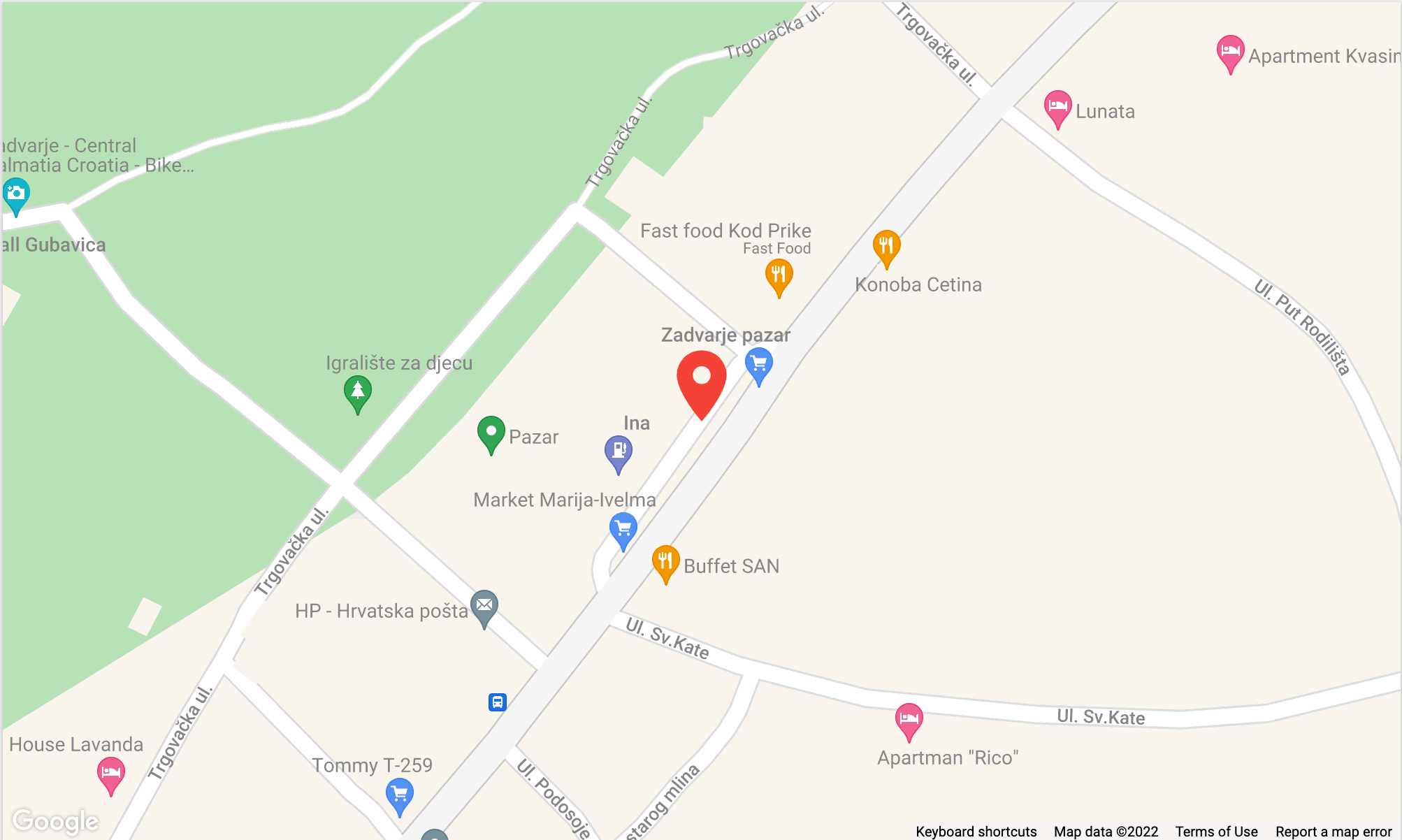 In order to relax from a hard journey we will take you to the nearest beach in small place called Pisak (15-minute drive from base) where you can enjoy the beauties of crystal Adriatic. Swim, relax and collect the strength for the next couple of day because you will need it.

Today is the day when you truly experience Cetina River by going down in rafts through the unique landscape created by the river, surrounded by cliffs and luxuriant vegetation. After taking your equipment and listening to the guide’s instructions, you will get into your rafts and master rapids of the second and third degree on your way to the village Blato na Cetini. Rapids and calm parts of the river take turns during the three-hour adventure. After we take our wet clothes off, we have a barbecue on a meadow next to the river.

Explore Dalmatian countryside on a bike. A great way to experience a place you are visiting is riding through it’s stunning scenery. Paved roads, fertile plains and rocky mountains – the landscape here is diverse and majestic. Today you will be your own time manager. We will give you bikes, helmets, small equipment and you will be ready to start your adventure.

We are back on Cetina River. The most inaccessible, but also the most beautiful part of the river canyon is near village Zadvarje. After we descend into the 170m deep canyon, we will swim, walk and visit the 55 meters high waterfall called Gubavica. We will go down the river accompanied by the roar of the water, which formed its bed through thousands of years, creating waterfalls and crystal clear lakes where we swim. After the trip, the lunch is organized in the local tavern.

Free day in Omiš or Makarska

Free day in Omiš or Makarska

Today you will have free day and you decide whether you want to spend it in nearby Omiš or Makarska. Omiš is a small town dating from ancient Greek period but it flourished in medieval period under the governance of pirate family Kačić, whose famous pirates were attacking merchant boats from Vennice, Dubrovnik, Split and Kotor. In the 1444, Omiš became a part of Venecian Republic and after them it belonged to Austrians, French, and to Habsburg family until the World War I. Later on, Omiš shared the same destiny like the rest of Croatia.
Makarska and it’s Riviera are one of the most popular tourist destinations in Croatia. It is situated in a naturally protected harbor protected by two capes. It’s history will impress you and you will enjoy it’s vivid atmosphere during summer season.

In the morning we go to Brela (15 min. drive), a small town on Makarska Riviera. After you get your equipment and hop into your kayaks, we will row to the beach known as Vrulja. Vrulja is famous for its underground river spring that flows from the mountain Biokovo into the sea. First, we visit the spring and the nearby caves, and then we go to the beach where we can swim and snorkel.

Transfer from Zadvarje to the airport.

Want to join this adventure?

No need to pay in advance

Arrival on location or transfer 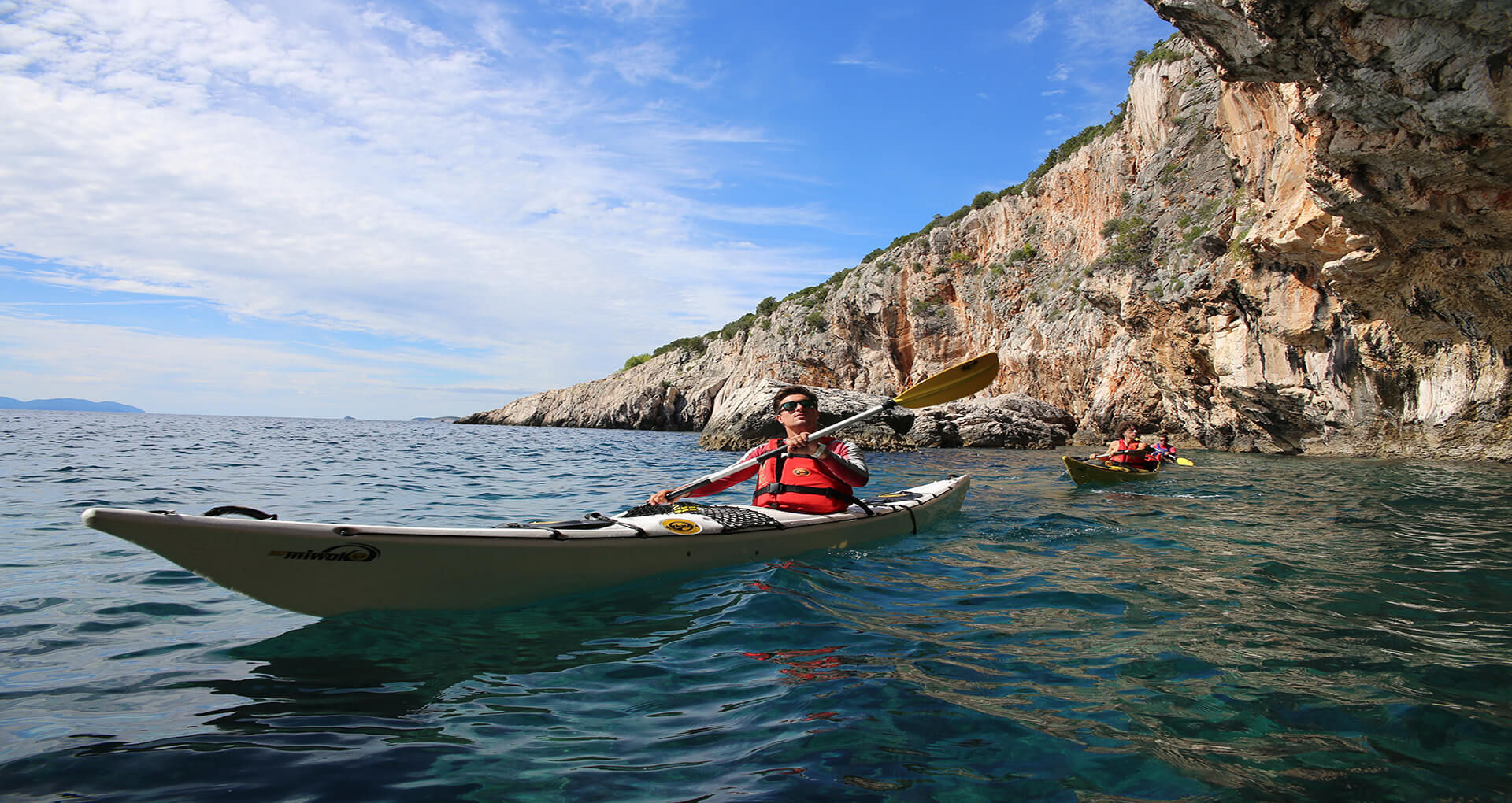 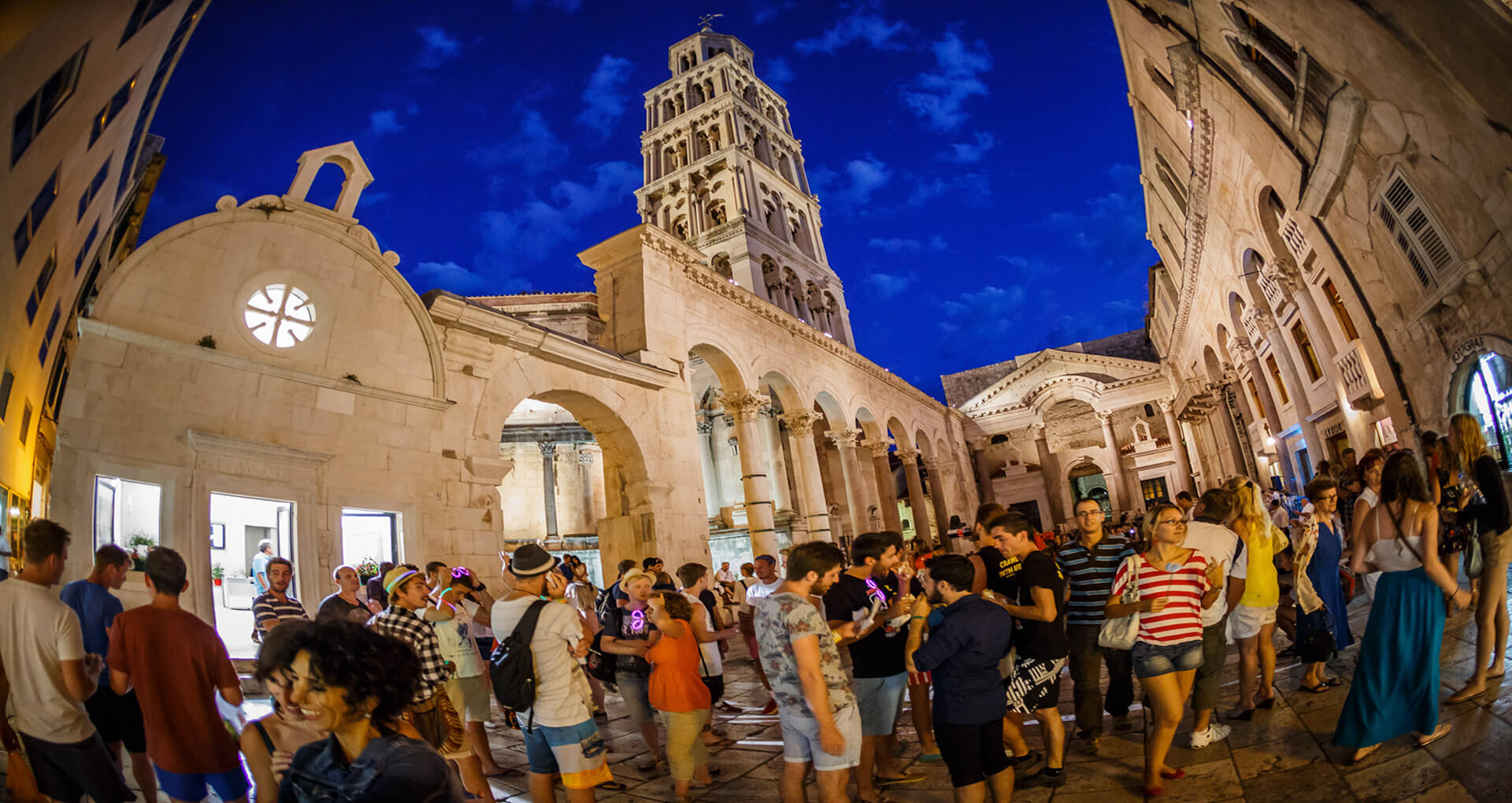 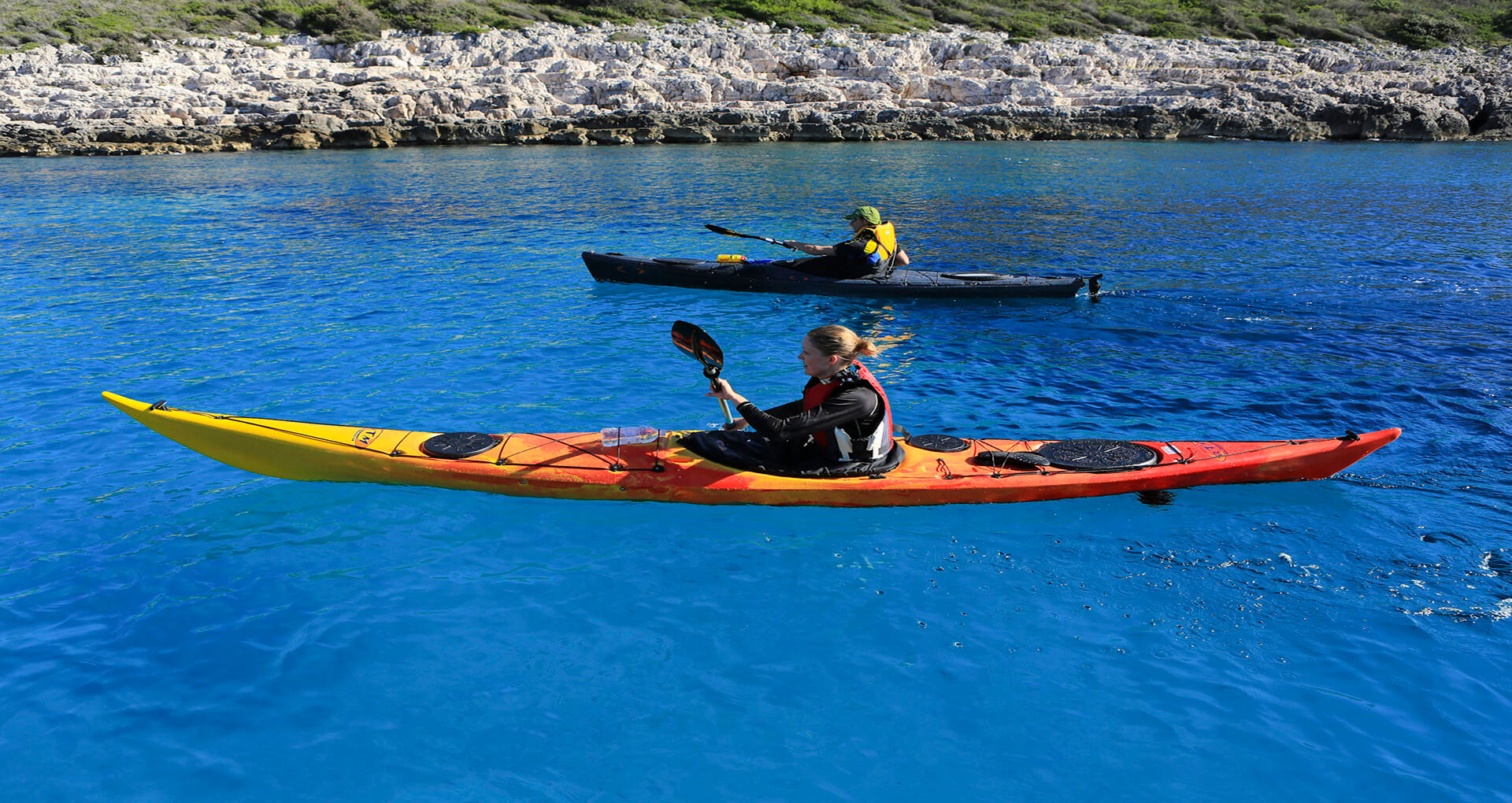 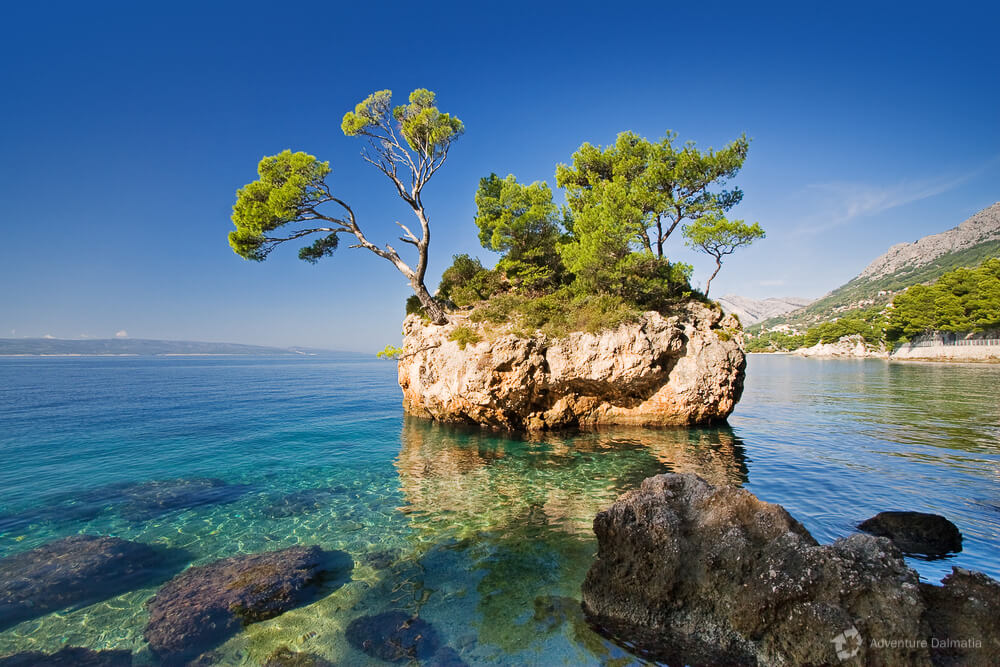 If you have a question we probably have an answer

Who can join Adventure week program?

Anyone in reasonable health and fitness can attend Adventure week. This does not mean one has to be in a great fitness shape.
The minimum age for a child is 8 years but a child can be younger and phisically active. There is no maximum age although anyone over 60 should be in good health and perhaps consult with a physician if you have any concerns. If you are pregnant we do not suggest Adventure Week.

Do I have to have some special skills? Is some kind of experience necessary?

Our activities are suitable for individuals with no experience. At the beginning of every tour, instructors hold safety briefing explaining each activity. All safety instructions are given ensuring all participants are able to perform the activity. Weather conditions are always taken into consideration.

Where are we accommodated?

You are accommodated in Zadvarje village; a picturesque little village with stone houses, 45 minutes from Split and 35 minutes from Makarska

Accommodation in a private house, 3 activities (rafting, canyoning and kayaking + bicycles to use) and half board services. Optional activities, transfers or bike rental are offered for an additional fee.

What should I take with me?

Half board is included, breakfast and dinner. Additional meals can be bought for 12-15€ per person in the village. Prices are a bit higher if you go to Split or Makarska, 15-20€ per person.

How much money should I take with me?